As riding education has increased so has awareness of more subtle problems and their cause effect. 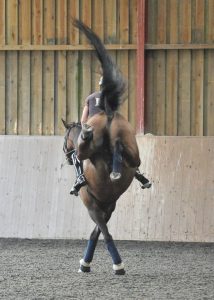 Vets will work with other  professionals to help the owner manage and develop a horse, and should be called in at an early stage to enable any underlying clinical causes to be checked for.

A 14 year old warmblood gelding had been owned for over 10 years and competed successfully in a range of riding club classes. The rider therefore noticed when the horse began to resist bending the neck right when ridden. When the vet checked, there was muscular soreness and stiffness, so physiotherapy was agreed. There was initial improvement, but within 6 weeks the situation had deteriorated again. A second vet examination of the horse included an ophthalmic examination. This revealed some early changes to the right eye’s optic disk. Over the following 4 weeks the horse became disorientated when turned out in the field, so riding was stopped. The owner’s impression was that the horse was increasingly unhappy and becoming distressed. Further examination indicated that there was complete Progressive Retinal Atrophy in both eyes. The horse had become blind within 3 months.The rapid progress of the disease meant that the horse was unable to adapt and cope with the condition. He was euthanased

There are no upcoming events at this time.